After csu resignation: will mayor eck remain in the district council?? 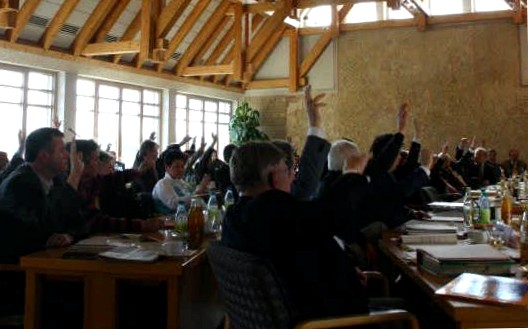 The question is simple, but the answer is far more complicated than expected: can habfurt mayor rudi eck (62) keep his seat on the county council after leaving the csu?? The spontaneous "yes, of course, that comes from many district council colleagues on this question is correct, but the way there leads deep into the subtleties of municipal election law.

The last time there was a similar case was in augsburg, but never before a comparable situation in the district of habberge: in augsburg, a district councilor left the csu after internal party squabbles and switched to the greens, which led to a lengthy dispute over the legitimacy of his mandate.

the legal situation is clear, as olaf ruckert from the municipal supervisory authority in the district office explains: municipal mandates in local councils or in the district council are honorary offices and as such a civic duty "their exercise is not bound to membership in a party." this principle is based on articles 30 and 33 of the municipal code and their commentary by the highest jurisprudence.

Ruckert cites a fundamental ruling by the administrative court in kassel: "members of the municipal council retain their mandate even if they resign from the party that delegated them. The execution of the mandate is a general civic duty. … There is no obligation to follow the orders or wishes of the electorate … Does not exist."

the judges thus put honorary local politicians before "professionals" in state parliaments and the federal parliament, although unlike the latter, they have "no general political mandate own. In one decisive point, however, the same iron rule applies from the federal parliament down to the village parliament: the elected representative of the people is only subject to his or her conscience (which always becomes an issue in the federal parliament when the famous "fraktionszwang" (factional coercion) is applied) once again on the agenda).

According to this principle it is therefore no question: rudi eck may also remain as a non-party member of the district council. The fact that he was elected to the county parliament via the faction list, as opposed to the mayoral election, does not change this. Because the county council election is also a personal election, the voter has not only the possibility to vote directly for his/her favorite, but also to push him/her up the list with up to three votes.

in the last county council election in 2008, eck was indeed one of the most avid vote collectors: of the 784.644 electoral votes, by which the csu secured 21 of the 60 seats in the district council, eck won 20.994. Only district administrator rudolf handwerker (30.884), the member of the bundestag dorothee bar (27.373), siegmund kerker and michael ziegler ranked even ahead of the habfurt mayor.

For faction chairman gunther geiling (breitbrunn), it is "no question", that eck can also serve without a "party book" will continue to belong to the csu faction in the district council. The nuance here is different from that in the habfurt city council, where eck, as a csu member (but not as a faction member), has so far always attended the meetings of the csu city council faction "ex officio" has participated, but is now not automatically invited to do so, according to the faction.

the situation would be different if eck not only left the csu but joined another party. The commentaries on the municipal code also give a hint, as ruckert looked up for our newspaper: if a member of the district council "shows a fundamental change in his political convictions" by changing party, this is a "fundamental change in his political convictions, would this automatically entail a change of parliamentary party?.

In this case, and especially if the change results in new majority conditions, it had to be examined whether the mandate in the district council could still be carried out. In any case, the latter does not apply: with rudi eck, the csu has only 21 seats and thus, even together with the young list close to it, no majority in the 60-strong (with the district administrator 61-strong) district council. If there are only 20 instead of 21 seats, this does not make the csu, as one would say in a french way, any better.

the question remains whether it is at all possible to give up a mandate in the district council. "Yes of course, these cases are also clearly regulated", says ruckert. Such an exceptional case exists, for example, when a district council member moves away from the district (as was recently the case with eva mendl of the left-wing party) or in the case of other serious personal reasons (such as illness).

Another far-fetched possibility is provided for by the municipal code: if a party or electoral group is banned (as is currently being discussed in the case of the npd, which is not, however, represented in the habberge district council), its municipal mandates are also lost; in this case, the district council or municipal council has been reduced in size accordingly.