Dr. Umes: «give people the chance not to die as a racist» 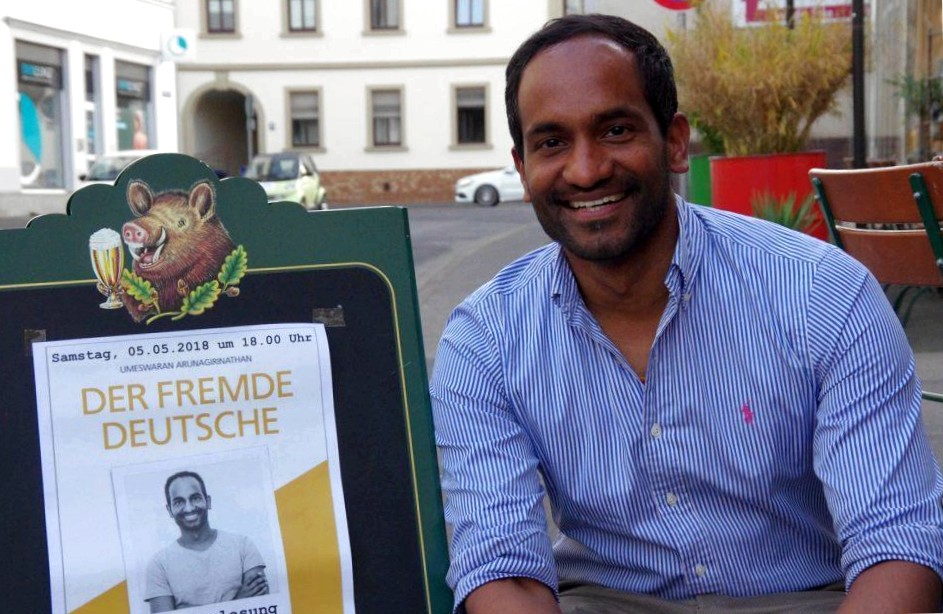 "Being spat at is worse than being punched in the face." "a hindu and a muslim, the german language is the bridge and together we celebrate christmas." it’s statements like these that emerged at the author’s reading in the "zoom eulenspiegel" guesthouse einpragen. Because they are connected to a life story.

This life story is impressively and authentically described by dr. Umeswaran arunagirinathan, in short dr. Umes. 40-year-old tamile is currently training to become a cardiology specialist in bad neustadt, germany. In his two books "alone on the run" and "the foreign german", he describes his nine-month odyssey from sri lanka to germany, which he experienced at the age of 12. Growing up during the civil unrest on the island in the indian ocean, the death of a sister and the search for a tugboat to bring him to europe for a lot of money affected him. Matured and now living with his uncle in hamburg, he attends school, is an author for the school newspaper, school spokesman and becomes a writer through a call from a publisher: "my first book was written on the night watch in the hospital", he says and confesses: "it was a processing process!"

again and again dr changes. Umes during the reading between chapters from his book and redemptions from his life story and the related experiences and insights. The stamp "you are a stranger" he himself has been given marks because of the color of his skin. From this, he can also assess how important it is to have people around you who value you regardless of your background. This insight includes the appreciation of the volunteers, without whom the flood of refugees in recent years could not have been managed: "the state and tax money alone were not enough." but also with regard to the refugees he noted that integration requires the willingness to fit in.

In the individual chapters, he describes the reunion with his parents after 16 years. Their desire for an arranged marriage linked dr. Umes with explanations and critical remarks on the caste system, but nevertheless claims an understanding for traditional peculiarities. He tells of an "overjoyed, unique feeling" at his last state examination, about the choice of clothes for his job interview, about buying leather pants to visit the rosenheim autumn festival — and the bouncer who refused him entry to a discotheque there: "should i show him my german passport??"

but even in the shady sides of his being a stranger he sees the positive, for example, when an 80-year-old patient calls him a "black doctor" for the time being rejects and then still calls him a "nice boy" praise — his conclusion: "give people the chance not to die as a racist." even though dr. Umes admits that his nature and life history make it easier for him to take punishment, but there are still painful situations that he describes with phrases such as "spitting on people is worse than being punched in the face.

The descriptions of dr. Umes beruhren und beschamen. They are captivating because of the authentic, not exaggerated nature of the text and the presentation; they shame because both our society, but also decision-makers of our system exclude the foreigner and deny him integration — but here, too, dr. Umes is a man of action and a role model, because he hopes that in 20 to 30 years the question "where are you from" will be answered no longer have a negative connotation.

Post Views: 47
Предыдущая запись For a review without reservations
Следующая запись At the fire department training in baumgarten, the youth also stood their ground