«For always in the heart» 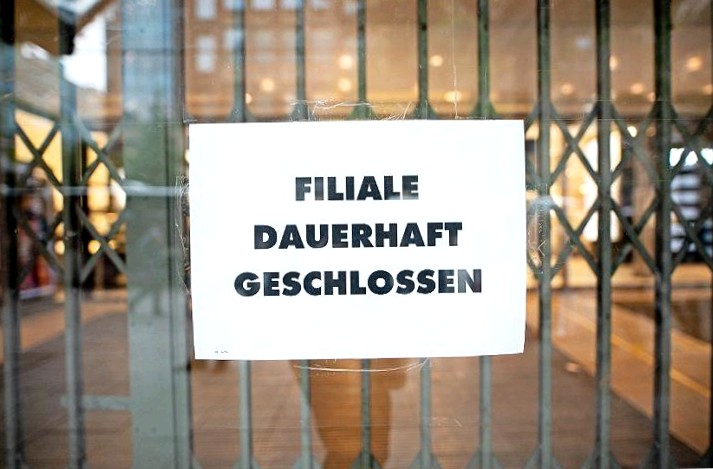 "Forever closed — forever at heart!". Handwritten, the farewell grave hangs on the barricaded entrance door of the kaufhof store in essen, which has been closed since wednesday. At the kaufhof on hamburg's monckebergstrabe, the message on the tur is less emotional but just as clear: "store permanently closed".

The long-threatened wave of closures at galeria karstadt kaufhof (gkk) is now rolling in. 37 warehouses were closed in these days, said on thursday the chairman of the gkk general works council jurgen ettl to the deutsche presse-agentur.

Another six stores still had a grace period until january. The department store closures are part of the restructuring plan for the last remaining major german department store group following the successful conclusion of insolvency proceedings. With around 130 department stores remaining, the group hopes to quickly return to the black.

According to ettl, around 3200 employees will lose their jobs as a result. A company spokesman declined to comment on the closures on thursday.

Whether in hamburg or essen, braunschweig or fulda, landau or witten: wherever the stores close, this is the beginning of a serious situation for the affected cities. Because in the shopping streets, an important point of attraction is thus eliminated. In order to preserve the attractiveness of the shopping malls, new uses must be found quickly for the warehousing properties.

This is not hopeless, believes joachim stumpf of the retail consultancy bbe. "Almost all of the stores that were closed are in good urban locations that have development potential", he says. In most cases, there will be new businesses there in the future, but on a much smaller scale.

The demand for space in the classic inner-city retail offerings from fashion to consumer electronics had passed its peak. Instead, other uses had to be found. In a certain sense, this is also a reflection on the past. "Before the second world war, there was much more mixed use in the inner cities than there is today. Only after the war did the monoculture of commerce emerge", emphasizes stumpf. "The pendulum will swing back in the other direction on the warehouse sites, for which a new use must now be found. There will be much more mixed use with retail, service providers, offices and also housing." one of the main problems is that the classic warehouses with their coarse, often windowless flat surfaces are, by their very architecture, hardly suitable for other uses without major conversions. A recent study by the consulting firm pwc on the fate of 52 department stores that have closed since 2009 found that over 80 percent of them had to be remodeled or even demolished in broad style.

According to the study, attempts to continue with pure retail solutions at the former department store locations have rarely been successful. A large proportion of the new openings failed.

Much more successful were concepts that combined retail offers on the first floor with offices and residential space on the upper floors, sometimes also combined with hotels or nursing homes.

Stumpf believes that an individual future concept tailored to the location must be found for each house. In the end, the industry expert considers the current closures to be unavoidable — even without the corona crisis. "In germany, there is only room for a maximum of 100 warehouses in the current format. The changes we see now came one way or another — just not so quickly."

Post Views: 31
Предыдущая запись Everything in the green
Следующая запись Finance minister: cyprus’ euro exit would be a centuries-long setback