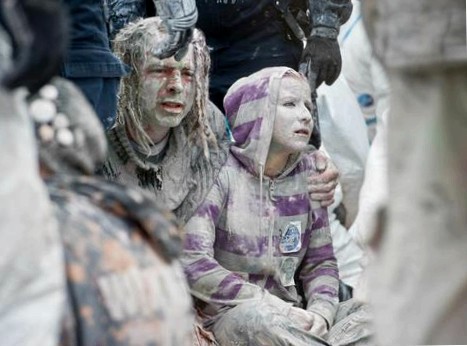 On wednesday, a large number of officers led or carried about 340 activists of the occupy movement out of the tent camp that activists had set up in front of the ecb building more than half a year ago. The action was largely peaceful. There were isolated scuffles. The police arrested about a dozen people for spraying police officers with paint.

A music demonstration in frankfurt’s city center was also broken up peacefully by police on wednesday evening. After being asked to do so by officials, a large proportion of the 500 or so participants voluntarily left the square in the city center before the event began. According to the police, there were no violent riots in the rest of the city until the evening.

Whether it remains so is questionable. The blockupy alliance called for a march through the city center on thursday despite the ban on demonstrations. "We are taking away our right to freedom of assembly"!"And "break the total ban strategy!", it said in a press release.

Earlier on wednesday, the federal constitutional court had confirmed a broad ban by the city of frankfurt on all events from wednesday to friday. Originally the capitalism-critical organizers wanted to use the whole long ascension weekend for protests against the european austerity policy and the power of the banks. A blockade of the banking district was also planned. Police expect around 2,000 activists to be ready for violence.

The blockupy alliance includes organizations from the left-wing political spectrum, including the left-wing party and the globalization-critical network attac. The alliance is linked to the worldwide occupy movement, which occupies central squares to criticize capitalism.

However, according to a decision of the hessian administrative court, a rough demonstration on saturday will remain permitted, with several tens of thousands of participants expected in the city on the main.

The life in the city is partly affected by the actions and the countermeasures of the authorities. The goethe university plans to keep its university buildings closed from thursday to sunday as a precautionary measure — also on friday’s bridge day. A subway station and an s-bahn station in the city center are also closed due to the block-up action days. Many companies in the banking city have called on their employees to work from home on friday — or not to show up in suits. The commerzbank is even closing two skyscrapers. Some businessmen in the city also closed their stores until monday — some protected their store windows with plywood panels.