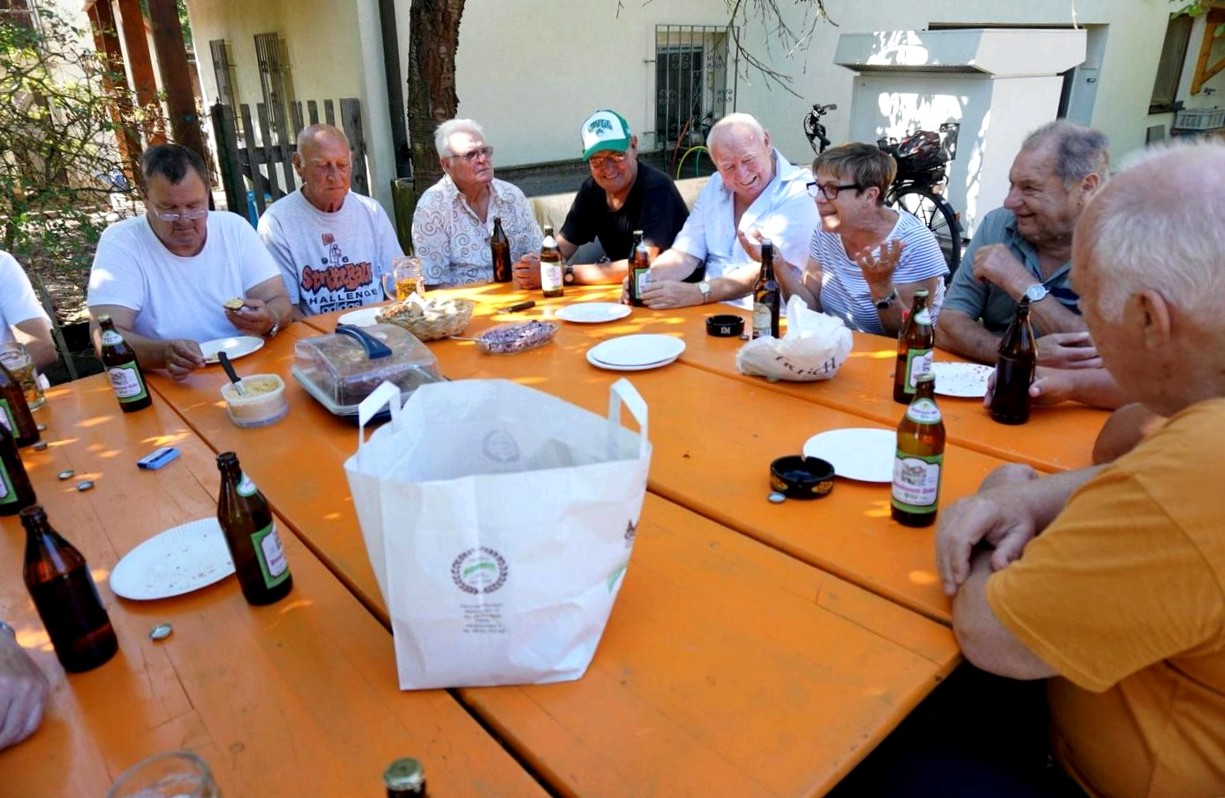 For the "mondaysstammtisch" the brewery tavern heller on hauptstrabe is a unique and the coziest institution in herzogenaurach. The stammtisch meets now for ages in the quaint guesthouse. Especially the warmth and friendliness of gitti adler, hans heller’s sister, is appreciated by the stammtisch brothers.

At the stammtisch there are always heated discussions and debates and the topics are seemingly inexhaustible. They range from politics to sports, especially the various soccer clubs, to society and overflowing tomato canes. Controversial opinions often clash, also politically, and it can get a bit noisy at times. There are comments on everything, often witty and omniscient as well as gently hamish, one knows each other for years, after all.
The truth is seldom found, but one seems to resign oneself to it, and a new topic is found. The situation is less heated than in political disputes when comments are made about everyday events or when a table host reports on private matters. Thus, from old-age infirmities, from which hardly anyone is spared, from grandchildren, from personal experiences and, of course, from small local events.

One had almost missed also the fruhschoppen, because one with the doctor "ewig" had to wait a long time. Every now and then jokes brighten up the faces of the cheerful pensioners, and everyone is an actor or sometimes even the main actor. What they all have in common, however, is respect for the opponent. And that is good and should stay that way.

but the heller family is also on vacation, and hard times are ahead for the regulars, because there is no other pub in herzogenaurach for a morning pint, and a period of suffering lasting several weeks is also beginning for the kartlers. So it is evaded on the surrounding area, so for example in the inn jordan to falkendorf, and the monday regulars’ table meets then with the stammtischbruder hennes (hans kaltenhauber) in falkendorf. Under the shady fruit trees in the large garden, it was nice to have bread on this day, and of course there was heller beer, what else?. After the bread time there was still a solid salt roast with potato salad at noon, a speciality of hennes, and the early pint lasted as expected into the early evening hours.

Regulars’ tables are important in germany: "man lasst dampf aus dem kessel. First it boils up, then it’s good again", the real stammtischers know. The problem: there are fewer and fewer pubs. Everything that moves the village is discussed at the meeting: from decisions of the town or village council and about the weather to illnesses, politics and deaths. The only argument is "when someone tells a nonsense", growled one. But it is not quite like that. Especially when it comes to politics and refugees, things get a bit heated from time to time. "There are people who say nothing until the second beer, but from the fifth it gets louder", said the manni.

The next generation is missing

the pubs will become fewer, in addition also still the tavern death on the country comes. Keeping a guesthouse in the village these days is difficult for the innkeepers. If the locals drink their beer only once a week, no one can live on it. Besides, bureaucracy and the many regulations do not make the life of a landlord any easier either.

As trite as it may sound, things used to be a bit different in the old days. The men enjoyed a beer — or two — after the service. There came the clubs. All the family celebrations were held in the next room of the village pub: baptisms, weddings, birthdays and funerals. In the meantime, many festivities also shifted to the clubhouses.

Moreover, the previous regular audience is getting older and fewer. Young people hardly ever go to the pub to drink their beer, and middle-aged people no longer have time to go to a pub because of their work, complain the "mondagsstammtischler".