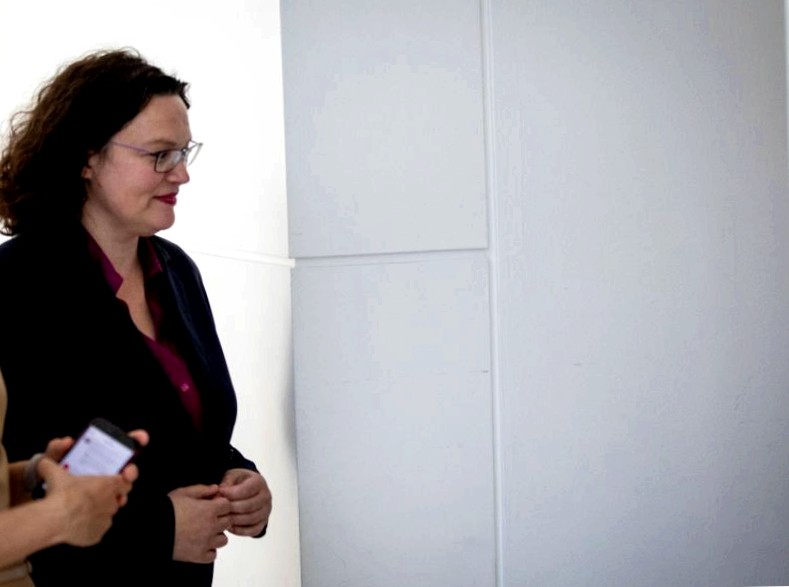 Spd faction leader andrea nahles failed to get a majority in test votes in the three party groups on wednesday, according to a media report.

There was "nowhere near a majority for nahles" among the conservative seeheim circle, the networkers and the party left, report the newspapers of the vrm group (friday), citing party circles. It is therefore likely that competitors for nahles will come forward by the deadline set on monday. Even if nahles gets a very weak result without an opposing candidate, she is unlikely to be retained.

According to the newspapers, there are also plans to bring forward the national party conference planned for december and hold it before the state parliament elections in saxony and brandenburg (1. September).

In the event of a defeat in the new election of the parliamentary party executive, nahles will probably also resign as spd chairwoman. This is reported by the "bild" newspaper (friday) with reference to people close to nahles. Both offices are clearly linked. As party leader, she has ? Without the chairmanship of the faction ? "No power lever, can’t make a difference. The example of cdu leader annegret kramp-karrenbauer shows that it doesn’t work".

According to information from the deutsche presse-agentur, several participants in the parliamentary group meeting on wednesday also made the same comments — as did nahles herself in a smaller setting.

After the crash in the elections to the eu parliament and in bremen, a debate flared up about nahles’ role in the spd. Nahles then called on her critics to stand up to her to clarify the question of power. The party’s executive committee decided on wednesday to bring forward the new election that was originally planned for september — just as nahles had suggested. However, no opponent has yet been found — among others, the former party leader martin schulz, who was being considered for the post, waved him off.

Juso leader kevin kuhnert said on phoenix that in recent years, the spd has reacted to political developments in a "snap-action" manner. "No party should actually know better than the spd that nothing at all changes for the better with some quickly breathed personnel changes."

Former party leader matthias platzeck told the "passauer neue presse" (thursday) that the spd has already had many changes at the top of the party. "What we are experiencing now is the result of a long evolution."Prudence is now called for, the party must remember its core values. "We have always been the seismograph for people’s concerns. The others are doing well, we have to keep up."This is an "existential crisis" for the spd. It will only be able to master the "highly critical phase" "if we deal with each other openly, unconditionally honestly, but also with human decency.

Kuhnert demanded that the climate protection law agreed with the cdu/csu parties in the coalition agreement be passed in 2019 and become the "instruction manual" for the coming years and decades. Brandenburg’s juso state chairwoman annemarie wolff told the deutsche presse-agentur that the election results showed "quite clearly that we have simply slept through certain social issues, whether it’s climate protection with the fridays for the future demonstrations or digitalization in particular.

Parliamentary group vice-chairman karl lauterbach accused nahles’ critics of cowardice. "Up to now, there are many who, even in the background with the press, say that andrea nahles is not the right party leader, but at the same time no one is prepared to run for office. Personally, i think it’s cowardly," he said in berlin.

Florian post, a member of the bundestag, openly called on the party leader to resign. "Just because it was andreas childhood dream to occupy leadership positions in the spd, she must not now take the whole party into hostage," post told the newspapers of the editorial network of germany. He firmly expects that there will be an opposing candidacy.