The alley wine festival without alley? 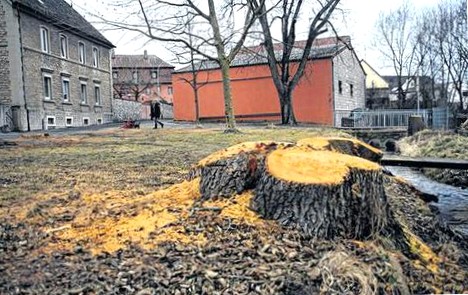 The alleeweinfest in the heart of wiesentheide is not necessarily one of france’s great festivals, but it ranks as a secret tip. During the festive season in july, many local people enjoy the idyllic atmosphere under the trees by the stream. Nearly all of these trees had to be felled during a community timber campaign, which the organizer of the festival, the fischer winery, is not exactly pleased about.

As junior manager thomas fischer confirmed when asked, it had initially been agreed that only three linden trees along rehausergasse would be removed, which was understandable. Finally their crowns already showed damage. In a meeting of the building committee the municipal council also determined that. But the three lime trees were not enough, several alders that stood along the sambach, as well as other, apparently not exactly sick trees, were sacrificed to the saga. A whole two trees remained standing on the land.

It was only when the workers were already falling that the extent of the action was noticed and an attempt was made to save what could be saved, fischer described. "We didn’t like it, especially since we didn’t know anything about it. But what do you want to do, the land belongs to the municipality?."Nevertheless he and the family had been asked several times by burgers, what the fall action was about. "Well, tough luck," is thomas fischer’s conclusion.

Mayor werner knaier defended the action. The family fischer had been involved, one had left on her wish specially a rough chestnut tree stand. The three linden trees along the path had to be removed, the stumps had already been felled out. Knaier commented on the alders along the stream that their roots often caused problems during floods. Another tree, which stood on private land, was felled at the request of the landowner.

Besides, the alders were sprouted again on their existing stumps. A plane tree, which survived the fall action next to a chestnut, has more space and can now really unfold. One has given the whole action quite some thought, after all, the wine festival area, as well as the adjacent town hall courtyard, is part of a planting concept. New, already somewhat coarser trees, were ordered in short.

According to the tenders, new trees should also be planted at the festplatz by the beginning of april at the latest. "There will be an avenue there again for the fischer wine festival", promises mayor knaier.

The schedule is similar for the areas in wiesentheid in the bahnhofstrabe and at the schonbornsche schafhof towards the neustadtstrabe, says knaier. There, too, the municipality recently cut down some old trees. They were also replaced with short ones after consultation with gardeners.