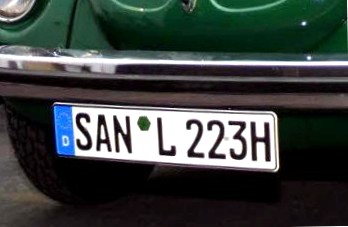 Burgermeister roland wolfrum has reason to rejoice. The wish of the majority of stadtsteinach citizens and the city council has been fulfilled: in the future, the old san license plate may be used again. At the same time, the citizens of wonsees were allowed to apply for the ebs designation for ebermannstadt if they so wished.
Although district administrator sollner was able to make the decision alone, he wanted to hear the opinion of the council first at yesterday’s meeting of the district committee and to base his decision on it.

The new regulation is made possible by a change in the vehicle registration ordinance from 1 january 2009. November 2012. Due to this change in the law, the federal states are again allowed to permit old license plates as additional desired license plates in addition to the current county code. The bavarian council of ministers has decided to make use of this option, leaving the decision to the individual counties and independent cities.

Curious situation
"we have other and more important problems to solve", said district administrator sollner. Nevertheless, he put the topic on the agenda and informed the council how the other upper franconian counties have decided or will still decide. The picture is by no means uniform: a clear "no" came from hof, and bamberg is also likely to reject it. Kronach, on the other hand, has already decided to allow the old stadtsteinach license plate, and bayreuth, forchheim, coburg and lichtenfels are also in favor of the new arrangement.

Not an easy situation for sollner: he would have liked to stick exclusively to the ku mark "because it has an identity-forming effect for the district". But a no from kulmbach led to the curious situation that citizens of the district of kronach could use the stadtsteinach license plate, but the stadtsteinach residents themselves could not.

"No rebels
for sollner: whoever wants to have the san license plate should also be allowed to have it: "a stanicher who puts san on his car is therefore not a rebel against the county of kulmbach." in addition, many people in stadtsteinach saw a positive decision as a boost to the image of their town. Among them is mayor roland wolfrum, who attended the meeting as a guest: "this is not an anti-kulmbach stance, but a chance to get a lot of publicity for our community with little effort."

The members of the committee were tolerant: "i think it’s a gigantic nonsense, but if it’s for peace of mind, people should be allowed to screw in whatever they want, means klaus zahner (free choice). Inge aures (spd) also sees it roughly: the people have to buy the signs themselves, and the district office can’t care which number it issues." veit pohlmann (free democrats) expressly supports the advance, while gerhard schneider speaks out against it on behalf of the csu faction: "a license plate is a factor of order, and that falls away if everyone can do what they want."

Order or not, individualism: in the future, whatever you like will be allowed. And this applies not only to the people of stadtsteinach or wonsees, but to all citizens of the district — according to the law: even a person from kulmbach can choose ebermannstadt as the license plate of his choice, a person from thurnau, for example, can choose stadtsteinach if he feels like it.

Issue from 10. July
excluded from the new freedom are the people of enchenreuth: they were not allowed to return to san, because since the territorial reform they have belonged to the district of hof, which rejected the new arrangement.

What happens now? The county council requests the approval of the two additional license plates. After publication in the federal gazette, expected on 10. July, they were then allowed to be issued.